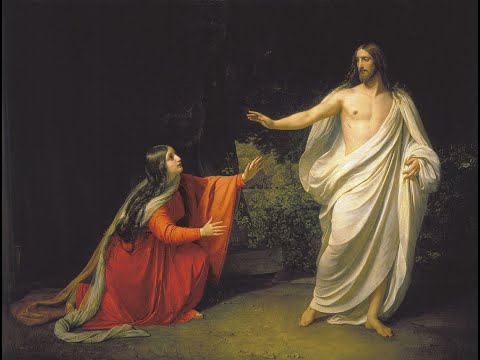 Resurrection? Prove it to me!

A Sunday school class of 4 year olds had been learning about the story of creation in Genesis. The teacher decided to do a little review with the children to see how much they remembered. “What did God make on the first day?” she asked the class. “The day and the night”, said one bright girl. “Very good. And what did God make on the second day?’ “The sky”, replied another child. “Excellent. What happened on the third day?” asked the teacher. One shy little boy at the back piped up, “He rose from the dead!”

“Raised from the dead? Sure. Right. And I have a bridge in Brooklyn I’d like to sell you.”  Mary Magdalene's first reaction on finding the tomb empty on that third day was to believe that some person or persons unknown, had removed the body of Jesus. She convinced Peter and the other disciple, which has historically been identified as John, to come to the tomb to see for themselves. The fact that Jesus walked out of the tomb on his own power never crossed their minds. Even the disciple Thomas, who we read about next week, said, “Unless I see the nail marks in his hands, and put my finger where the nails were and put my hand into his side, I will not believe it.” They had all seen dead people before. And Jesus was dead. Thomas' words sound like the sophisticated rationalists of the 21st century. “It isn’t plausible,” they contend. “It didn’t happen.”

A lot of scholars and theologians and contemporary thinkers have tried to explain what really happened on that third day. Maybe, they have suggested, it was self-hypnosis. The disciples wanted to believe that their Lord was not dead, so they just invented it out of thin air.

But what if it did happen like the bible says it did? Let’s look at about the story a little closer.  Jesus’ resurrection from the dead is actually more plausible than any other explanation. That’s why we Christians make such a big deal about Easter. That’s why we celebrate.

But why did Jesus die in the first place? What was the significance of His death?

After a few of the usual Sunday evening hymns, the church’s minister slowly stood up and walked over to the pulpit and before he gave his sermon for the evening, briefly introduced a guest minister who was in the service that night.

In the introduction, the minister told the congregation that the guest preacher was one of his dearest friends, that he had known him from his childhood, and that he wanted the guest to have a few moments to greet the church and share whatever he felt would be appropriate for the service. An elderly man stepped up to the pulpit and began to speak.

“A father, his son and a friend of his son’s were sailing off the Pacific coast”, he began, “when a fast approaching storm blocked any attempt to get back to the shore. The waves were so high that even though the father was an experienced sailor, he could not keep the boat upright and the three were swept into the ocean as the boat capsized.”
The old man hesitated for a moment, making eye contact with two teenagers who were, for the first time since the service began, looking somewhat interested in his story.

The aged minister continued with his story. “Grabbing a rescue line, the father had to make the most excruciating decision of his life: to which boy would he throw the other end of the line? He had only seconds to make the decision. The father knew that his son was a Christian and he also knew that his son’s friend was not. The agony of his decision could not be matched by the torrent of waves.

As the father yelled out, “I love you son!” he threw the lifeline to his son’s friend. By the time the father had pulled the friend back to the capsized boat, his son had disappeared beneath the raging swells into the black of night. His body was never recovered.”

By this time, two teenagers in the congregation were sitting up straight in the pew, anxiously waiting for the next words to come out of the old minister’s mouth.

“The father,” he continued, “knew his son would step into eternity with Jesus and he could not bear the thought of his son’s friend stepping into an eternity without Jesus. Therefore, he sacrificed his son to save the son’s friend. How great is the love of God that God should do the same for us. Our heavenly Parent sacrificed the only begotten Son that we could be saved. I urge you to accept His offer to rescue you and take hold of the lifeline Jesus is throwing out to you in this service.”

With that, the old man turned and sat back down in his chair as silence filled the room.

The church's minister again walked slowly to the pulpit and delivered a brief sermon with an invitation at the end, however, no one responded to the appeal. Within minutes after the service ended, the two teenagers were at the old man’s side.

“That was a nice story,” politely stated one of them, “but I don’t think it was very realistic for a father to give up his only son’s life in hopes that the other boy would become a Christian.”

“Well, you’ve got a point there,” the old man replied glancing down at his worn bible. A big smile broadened his narrow face. He once again looked up at the boys and said, “It certainly isn’t very realistic, is it? But I’m standing here today to tell you that story gives me a glimpse of what it must have been like for God to give up His Son for me… You see…I was that father and your minister is my son’s friend.”

And since Jesus is not dead, people can encounter Him today. I can introdue you to lots of people who can testify what Jesus has done in their lives to bring them to peace and meaning and joy. He changes people for good. He’s alive you know. That’s what Easter is all about!